"The CBIS family is shocked and saddened with the passing of Mario, Allen, and Ron. These distinguished gentlemen will leave voids in our Company, in our hearts, and in their communities that will never be filled in the same way. However, we will honor their legacies by continuing the great work they both contributed to and championed. Fortunately, these leaders helped position our Company for success and we will march forward in the direction they so aptly agreed, pointed, and marched with us in. With our talented executive management team, our expert consultants, our Corporate Advisory Board Members, and all of our loyal shareholders, we will succeed." 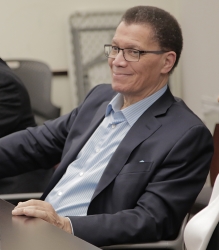 - Chief Medical Officer & President of the Scientific Advisory Board

Dr. Herman was CBIS' Chief Medical Officer (CMO) and served as the President of the Company's Scientific Advisory Board and Member of the International Government Affairs Board. In this capacity and with his broad medical knowledge base, Dr. Herman was able to help shape and direct the Company's successful research and development initiatives, including the structuring of partnerships with several well-established specialized research institutions, local and international universities, and government agencies. Along with Mr. Dabney, Dr. Herman led a formidable medical team to create the Cannabis Science Global Consortium, a research and development framework and platform to cooperate and collaborate with stakeholders worldwide. The Consortium links universities, foundations, corporations, and individuals to share research, ideas, and other relevant information, as well as to implement a cutting-edge research program to develop medicines and delivery mechanisms.

- President of International Government Affairs Board

Mr. Dellums served as the President of CBIS’ International Government Affairs Board and was a member of the Company’s Scientific Advisory Board. In this capacity, Mr. Dellums helped develop the Company’s relationships with public and private sector stakeholders worldwide. A life-long advocate of peace and social justice, Ron Dellums served for 27 years as an outspoken and highly respected member of the US House of Representatives. Initially seeking a life in education, community activism and social work, Mr. Dellums was called to public ofﬁce in 1967. His tenure in politics has been deﬁned by a strong adherence to the principles of social justice, community activism and peace as viable and necessary national and international pursuits.

Mr. Lap was the President of CBIS European Operations and a CBIS Director. He brought the Company a unique combination of expertise in Dutch and greater European medical cannabis law and policy as well as in the areas of health care, IT security, law enforcement, and government relations. Mr. Lap, last served as a Dutch health and IT regulatory lawyer in Amsterdam, had an extensive educational background through studies at the Het Amsterdams Lyceum, Colloqium Doctum University of Amsterdam, University of Amsterdam Law School, Open University and University of Liverpool, and speaks fluent Dutch, English, French, and German. With this he was able to make strong public presence through his numerous international papers and legislative initiatives regarding medical and non-medicinal cannabis laws and access throughout Europe. He also made several television and radio appearances on CNN, BBC, France 2, RTL, and various Dutch public and commercial channels to give public education and information on policy, laws, and current medical breakthroughs.