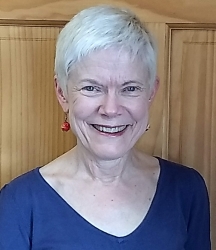 - Member of Scientific Advisory Board

Ms. Royall is a Member of the Scientific Advisory Board. As a specialized consultant, she will provide advice and expertise on health information databases, management systems, and Internet technology. Julia Royall is a leader in health information and has been working in international health in Africa since 1990, with more than 40 years of professional experience in the communications field. Julia’s commitment is to bring together information and technology with partners, projects and funding, using a variety of media.

Ms. Royall was recruited to the National Library of Medicine (NLM) at the National Institutes of Health (NIH) in 1997 to create a malaria research communications network (MIMCom) to support scientists in Africa as part of the Multilateral Initiative on Malaria. The first network of its kind, MIMCom comprised 27 research sites in 14 African countries and engaged over 30 partner organizations and institutions in the US, UK, Europe, and Africa.

As Chief of NLM’s Office of International Programs, she created innovative programs which focused on Africa and comprised outreach to medical librarians, medical journal editors, researchers, medical students, and health workers at the village level. In addition to adapting NLM databases for use in Africa, her work has encompassed a variety of media – from web-based interactive digital tutorials to posters and video. Under Ms. Royall's leadership, NLM developed greater focus on global health by piloting demonstration projects which drew strength from one another and tied into NLM’s major programs and databases

Prior to government service, she was Deputy Director of SatelLife, a nonprofit dedicated to satellite delivery of public health and medical information in developing countries. As part of the team setting up the first Internet connections for health in sub Saharan Africa, she initiated and directed the HealthNet Information Service. HealthNet News, the first electronic health publication on the continent published weekly for 20 years and pioneered digital sharing of medical literature in medical schools of sub Saharan Africa.

Retired from U.S. Government service, she is currently principal investigator for the African Digital Health Library (ADHL), funded by the Office of Global AIDS Coordinator/U.S. Department of State. Based at 5 universities across Africa, ADHL will showcase in-country research previously not digitally accessible. She is also developing an African Student Innovation Fund with Carnegie Mellon University’s Africa campus in Kigali, Rwanda.