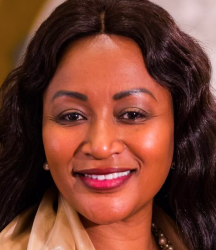 - Member of Scientific Advisory Board

Dr Brylyne Chitsunge is a farmer who has always been a tireless advocate for food security through the empowerment of farmers in general and women in particular, not only  in her native South Africa  but also throughout the continent. For many years, she has been travelling the world to discuss issues such as sustainable agriculture, climate change, and supporting women farmers as a dynamic and inspiring activist.  She is an internationally acclaimed expert and facilitator on Agriculture and farming in the African context.

Alongside the iconic  President Nelson Mandela, she is the only other African to have received the  Legion of Honour Bronze Medallion which is the second highest accolade given by The Chapel Of Four Chaplains (Philadelphia, USA) in recognition of her service to all people regardless of race or faith. Furthermore she is the first ever Pan African Ambassador for Food Security in Africa.

Ambassador Chitsunge has been a keynote speaker on Food Security at different global forums including:

Despite the journey being fraught with challenges and obstacles, she has successfully transitioned from a small scale farmer to a commercial  breeder of Kalahari Red goats, Nguni cattle, Bonsmara cattle, ostriches, free range poultry, indigenous pigs, rabbits, tilapia fish and most recently quail production. She also farms hybrid crops and a wide range of quality vegetables which she supplies to national supermarket chains and restaurants. She is a  21st century farmer partnering with  schools and universities to promote a farming culture. She has opened her farm to decision makers, heads of government, parliamentarians, EU delegates, host of International Federation of Agriculture Journalists, primary, high school and university students so as to give them a profound and educational on-site experience of farming.